Pieter “Piet” Cornelis Mondrian (1872 – 1944), was a dutch painter born in Amersfoort, Holland. Follower of the BAUHAUS and an important contributor to the De Stijl art movement, which was founded by Theo van Doesburg. He evolved a non-representational form which he termed Neo-Plasticism. This consisted of white ground, upon which “Piet” painted a grid of vertical and horizontal black lines and the three primary colors. 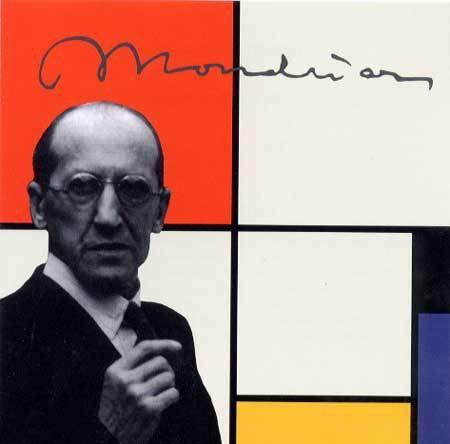 Mondrian´s paintings are very intriguing, as they are not composed of perfectly flat planes of color, you are able to see the brush strokes on the painting, although they are very subtle, he uses different techniques for various elements. The black lines are the flattest elements, with the least amount of depth. The colored forms have the most obvious brush strokes, and they all run in one direction. The white forms have been painted in layers using brush strokes running in different directions, which gives the painting a a sense of depth. Mondrian´s paintings of this period came to be increasingly dominated by white space.

Mondrian was introduced to art from a very early age: his father was a qualified drawing teacher, and with his uncle, Fritz Mondriaan (a pupil of Willem Maris of the Hague School of artists), the younger Piet often painted and drew along the river Gein.  In 1892, Mondrian entered the Academy for Fine Art in Amsterdam. He began his career as a teacher in primary education, but while teaching he also practiced painting. Most of his work from this period is naturalistic or impressionistic, consisting largely of landscapes. In 1931, he joined the group Abstraction-Création in Paris, France.

The earliest paintings that show an inkling of the abstraction to come are a series of canvases from 1905 to 1908, which depict dim scenes of indistinct trees and houses with reflections in still water.

While in Paris, the influence of the Cubism style of Picasso and Georges Braque appeared almost immediately in Mondrian’s work. His later work were deeply influenced by the 1911 Moderne Kunstkring exhibition of Cubism in Amsterdam. His search for simplification is shown in two versions of Still Life with Ginger Pot (Stilleven met Gemberpot). The 1911 version  is Cubist, in the 1912 version  it is reduced to a round shape with triangles and rectangles.

During World War I, he was in the Netherlands, that´s where he met  Theo van Doesburg. They carried out their own personal journey towards Abstraction.

“My technique which was more or less Cubist, and therefore more or less pictorial, came under the influence of his precise method.”

Along with Van Doesburg, Mondrian founded De Stijl (The Style), a journal of the De Stijl Group, in which he published his first essays defining his theory, for which he adopted the term Neoplasticism.

“I construct lines and color combinations on a flat surface, in order to express general beauty with the utmost awareness. Nature (or, that which I see) inspires me, puts me, as with any painter, in an emotional state so that an urge comes about to make something, but I want to come as close as possible to the truth and abstract everything from that, until I reach the foundation (still just an external foundation!) of things… I believe it is possible that, through horizontal and vertical lines constructed with awareness, but not with calculation, led by high intuition, and brought to harmony and rhythm, these basic forms of beauty, supplemented if necessary by other direct lines or curves, can become a work of art, as strong as it is true.”

At the Amstel Sun

I really like Mondrian´s work, because, first, it is very abstract and it lets your imagination fly high. I like the use of space, as the paint plates are well distributed and show certain order in composition and arrangement. The paintings reflect the spiritualism and the obsolete, uses the gestalt technique, and plays with our perspective. It is very plain and simple, which is a quality I reflect my self with. Be plain and simple. True to yourself. True to the lines and the primary colors. And as you can see, a lot of the fashion, architecture, design is based on a lot of his work. the De Stijl.